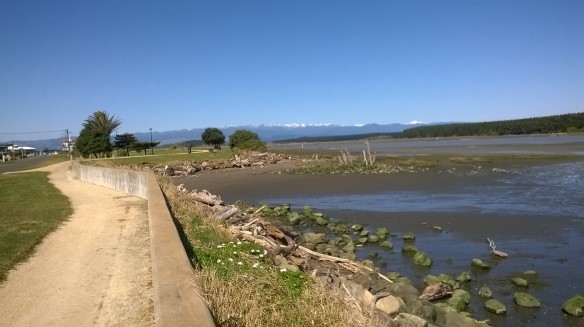 On a recent trip to our nearest beach we spent time enjoying the estuary at the river mouth, where my local river eventually flows into the ocean. These days the estuary, not shown here in the photo, is a protected heritage area, where many of New Zealand’s native water birds can be found at various times of the year.

It wasn’t the birds that captured my attention on this trip though, but the river and how it served in the opening up of my region in the 1870s when New Zealand was being settled. The river has changed its course over the years since then and definitely doesn’t seem as wide nor deep as it once must have been.

In the beginning, before the region was cleared of forest and before roads were established the river was the major means of travelling inland to where I live. Settlers arriving to the newly established town had to travel up river in large sailing boats for some distance to a nearby thriving port town, then onward in smaller river transport.

I tried imaging the big sailing ships carrying arrivals, people who had been on board for months, eager to reach their new homeland. The river shown here at low tide just didn’t seem to be capable of being navigated by a large sailing ship. However, I enjoyed imaging the presence of so many ships arriving at was back then a thriving port, that I was on board one of them arriving at a strange destination.

This river mouth of the Manawatu River played an important role in the development of my region.

3 thoughts on “Imagining the Past at the Manawatu Estuary”